My Life-Altering Experience
of Recording a CD 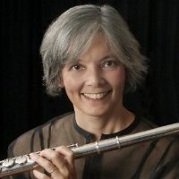 RIE SCHMIDT is a graduate of SUNY Purchase. In 1983, she gave her Carnegie Recital Hall debut as a winner of the Artists International Competition. Ms. Schmidt is a member of the Westchester Philharmonic, the American Symphony and the Riverside Symphony, and has performed with the New York City Ballet Orchestra, the American Composers Orchestra, Parnassus and many Broadway shows. She was featured flutist and dancer in Leonard Bernstein’s Mass that was performed at the Kennedy Center in Wash., DC. She and her husband, guitarist Benjamin Verdery, concertize as a duo throughout the US and Europe, and have recorded two CDs of music for flute and guitar on the Sony Classical and GRI labels. She was the president of the New York Flute Club from 1995-98, and is a founding member of  Flute Force.

Where do I begin?

I have produced two CD’s of my duo with my husband, guitarist, Benjamin Verdery, and two and a half with the flute quartet, Flute Force (we are working on the third.) I would say the “easiest” part is preparing the music- practicing, perfecting, and rehearsing for the actual recording. This is what we have spent the better part of our lives learning how to do.

The “hardest” part is everything else. Everything else comprises raising money to pay assisting artists, engineers, manufacturers, etc.; writing and/or understanding contracts with record companies, halls and engineers; applying for mechanical licenses from publishers; preparing and proofing program notes and the recording itself; distributing CDs to magazines and radio stations etc. Why do I consider these hard? Because they are things I have learned on the job, by the seat of my pants, skin of my teeth and sometimes not at all.

Each one of the CDs has had their own personal disaster stories. A few highlights:

One year, after producing a CD with Flute Force, we took a booth at the NFA convention to sell CDs, tapes and music. Despite our pleas to send them sooner, the CDs and cassettes were sent at the very last minute. The CDs were defective and the cassette paper inserts were not complete, and we had no time to redo them. We took orders at the booth and were not able to sell either CDs or tapes directly to the attendees at the convention. I learned a very important rule: Make sure you have a contract or something in writing with the record company that has at the very least, a projected release date on it.

Another time I had a verbal (read:no) contract with a recording engineer who was a friend, only to find that their concept and mine regarding our future together and payments were entirely different. Rule #2 was: Even if they are your best friends, always put everything in writing.

After proofing program notes and the actual recording many times, I received my first shipment of finished CDs, only to open the package and find I had left a very important person off the back cover of the CD and omitted a two measures of music in the final edit. Rule #3 was: Have as many people as possible check over your work if you are doing the liner notes and the final check of the sound recording.

Last, but certainly not least, is my most sad tale. Entranced by a big name record company, I sold one of my CDs to them. I signed a contract without any future for me regarding ownership of the CD, rights to re-record, or release by the company of the CD if it should fall out of print for a certain number of years. The contract was totally lopsided in their favor, and has no future for me. Rule #4 (and the most important): Always have an attorney who specializes in the arts review your contract with an eye on your future with the company and the CD.

As I work with Flute Force on our third CD I am trying to have us follow my own rules, of which there are many more. I hope that I won’t repeat those mistakes and just make new ones.

In the end, yes, I have snapshots of my playing in my duo and with Flute Force, and those are documents that I can cherish. I have learned to laugh at past foibles and it helps take away the sting of embarrassment at my mistakes. If more musicians can “share” their dirty laundry of bad experiences with others, it may help people avoid the some of the misfortunes of making a CD.