A Tribute to Julius Baker

Excerpted from Remembrances
compiled by the Juilliard School
March 11, 2004 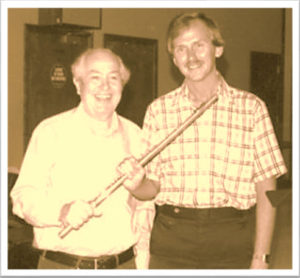 I was a postgraduate student of George Morey at the University of North Texas in the late 70s and early 80s. During this time, I studied with Julius Baker for five summers in his Dallas master classes and privately at his home in Brewster, NY. Dr. Morey, Mr. Baker, and two of my other teachers Albert Tipton and Harold Bennett were all classmates at the Curtis Institute under William Kincaid. Imagine! I am so fortunate to have lived and learned during this historic era of flute pedagogy.

It’s interesting how different teachers can be, even when they are from the same school. Morey was analytical, almost scientific in his approach to technique. Tipton was eloquent and keen on difference tones, pitch and improvisation. Bennett taught etudes as if they were on a computer – you played them at tempo with the metronome, constantly playing catch-up after the breaths. I studied only solo repertoire with Baker, so the comparison is not the same, but he used what I call the osmotic approach. He gave verbal guidance, of course, but mostly he would play, then you would play, and through osmosis you usually got it.

I learned a lot just by standing next to him – studying his embouchure and fingers, playing along with him, and listening. By observing his “cheeky” relaxed embouchure, I understood his resonant vibrato, spinning sound and tone colors. And while he played the most difficult passages with what seemed like lazy, limpid exertion, I could see the cogs in his brain analyzing notes and grabbing onto particular ones in fast passages so that everything was anchored and secure. I can still see him standing there, head tilted to the right, black-framed glasses sliding down his nose, flute drooping, carefully thinking through things as he played with impeccable, easy accuracy.

It all seemed so easy. Mr. Baker knew the literature and with a simple demonstration could say a thousand words, thus expediting the entire learning process. The osmotic approach worked well for me. My playing was greatly influenced by this great flutist, and I will always be thankful to have lived during his lifetime and thus be a part of his prestigious legacy.

He always came to class in running shoes. One day someone played the last movement of the Ibert Concerto (I hope memory serves me…). When the student finished the last note, a high A, Mr. Baker accidentally squeaked his sneaker on the tile floor and discovered it was a high F, like an F4. He picked up his flute, nodded to Martha Rearick at the piano and played the ending himself. With perfect intonation and dead-on timing, he substituted the last note of the piece with an F4 from the floor. Now that’s one up on all my other teachers!