New York flutist Don Bailey has recorded for Summit, Genuin, Parnassus, and Albany Records. In its review of his debut CD Voyage, American Record Guide praised his “impeccably controlled sound… full of artful colors and nuances…exceptional attention to detail…unfailing precision”. Fanfare said his Tribute CD was “…a delight from beginning to end… Bailey boasts a brilliant technique and a bristling sense of excitement.”. Coming January 2022, his new CD, Hypnosis, from Albany.

A native of Clarksdale, Mississippi, Don began his career in Dallas. He is a former university professor, board member of both the Greater Dallas Youth Orchestra and the New York Flute Club, and past president of the Texas Flute Society and the Louisiana Flute Society. He has performed at festivals in Aspen, Colorado, Nice, France, and Spoleto, Italy, among others, and at several National Flute Association conventions. In May of 2020 he will join the faculty of the Ischia Chamber Music Festival in Sorrento, Italy where he will perform and coach chamber music ensembles. 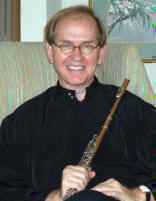 He is Director and Flutist of Voyage Unlimited, Inc., a New York not-for-profit committed to the performance, recording, and publication of new and standard chamber music for flute.  As solo flutist with Classical Quintessence aboard the Cunard cruise ship Vistafjord, he performed with Polish pianist/composer Adam Manijak, who has become an integral part of the Voyage Unlimited mission. The Voyage Unlimited Series of new orchestrations by Don and Adam is published by Falls House Press and distributed by Theodore Presser.

Don performs with collaborative pianists Donald Sulzen of the Munich Piano Trio and Dianne Frazer of Baton Rouge, LA, and with Attacca, Juilliard’s Graduate Resident String Quartet.  He has performed in Alice Tully and Bruno Walter Halls in Lincoln Center, Columbia Artists Management (CAMI) Hall, New York Society for Ethical Culture, and Munich’s Gasteig among others, and live for WNYC radio at Symphony Space.  He performed on the American Landmark Festival series with pianist Leslie Jones, and reaching out to an even wider audience, he performed in a Manhattan showcase of “world music” blending Afro Cuban, Brazilian, Spanish, Italian and Columbian styles with composer, film-scorer and guitarist Christopher Caliendo of Los Angeles. Other performances include those with the Aspen Festival Orchestra, the Dallas Chamber Orchestra, the Dallas Bach Orchestra, the Shreveport Symphony, and Voices of Change.

During the summer of 2005, Don worked closely with composer Gian Carlo Menotti at his home in Scotland, compiling a chronology of the composer’s works, and later at the Festival of Two Worlds in Spoleto, Italy organizing and performing on the chamber music concerts. In February 2007, he collaborated with members of the Dallas Symphony Orchestra and Dallas Opera Orchestra in a recording of Menotti’s The Old Maid and the Thief, produced by Lone Spring Arts and released December 1, 2007 by Albany Records.

Don’s articles have been published in national music journals including Flute Talk magazine and Flute Forum.  He was interviewed by Windplayer Magazine for its bestseller Flute Stories – 101 Inspirational Stories by the World’s Best Flute Players, which has become a must-read for anyone in the performing arts.  He was also interviewed for the Fall 2007 issue of The Flutist Quarterly, The Musical Road Less Traveled by Helen Spielman, and he is the cover interview of the September 2008 issue of Flute Talk.

Don studied flute at the doctoral level at the University of North Texas, and summers at the Aspen Music Festival, and the Académie d’été in Nice, France. His teachers include the distinguished flutists Julius Baker, Michel Debost, Alain Marion, Judith Mendenhall, George Morey, Marcel Moyse, and Albert Tipton.

His flute is a handmade 14-carat gold Brannen-Cooper flute.